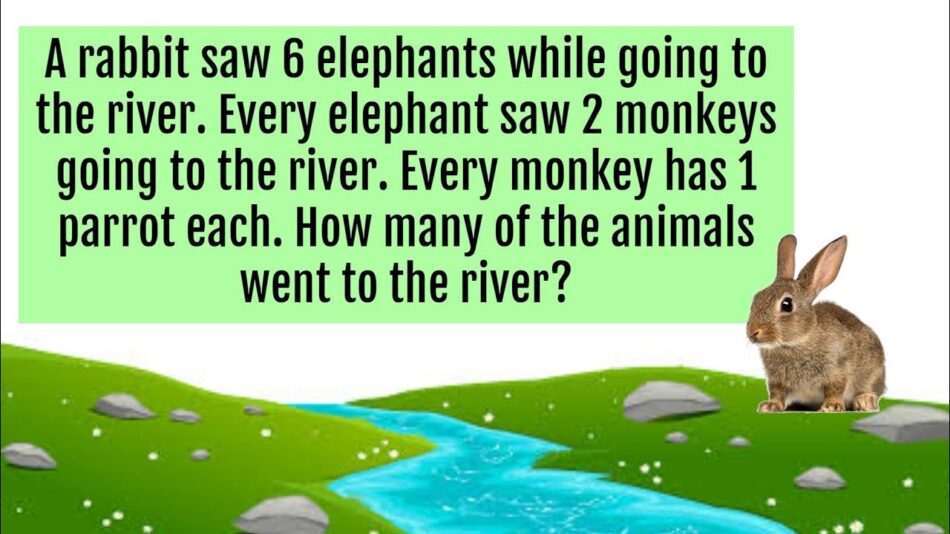 The ongoing coronavirus pandemic has led to people getting quarantined in their homes as they are not allowed to go out of their houses. This has led to people trying to look for so many ways and means to spend their time at home. There are many puzzles and riddles that can be found on Whatsapp, Twitter and Facebook which people are trying to solve, thus spending their time productively. These kinds of puzzles have kept people entertained in their homes.

1 Rabbit saw 9 Elephants while going to the river.  Every Elephant saw 3 Monkeys going toward the river. Each Monkey had 1 parrot in each hand. How many Animals are going towards the river?

The first sentence in the riddle is that one rabbit saw nine elephants while he was going into the river. This means that there is 1 rabbit and there are nine elephants.

The next sentence claims that every elephant saw 3 monkeys going towards the river. The trick in this sentence is that one can assume that each one of these elephants saw 3 monkeys. This would mean that the entire horde of elephants saw 27 monkeys as

The third sentence states that each monkey had one parrot in each hand. This means on monkey had two hands. So, there are six parrots.

The question is: How many animals are going towards the river.

The first statement says that one rabbit saw 9 elephants while going towards the river. It is important to note that the elephants are not going to the river. The answer to this is:

However, It is also important to note that the question asks for how many ‘animals’. This means that this does not include birds. The answer to this can also be 4 animals.